The U.S. Energy Information Administration released its Annual Energy Outlook 2022 (AEO) on March 3. It models a range of scenarios for America’s energy future. On the surface, it illustrates the challenge of transitioning from fossil fuels to renewable energy. But scratch the surface, and it also provides reasons for hope.

In the AEO Reference scenario, which is based on current policies and stability in energy price trends, the EIA models a continued heavy reliance on fossil fuel – gas in particular – and therefore almost no change in annual CO2 emissions (which only include emissions from energy use, not production) by 2050. 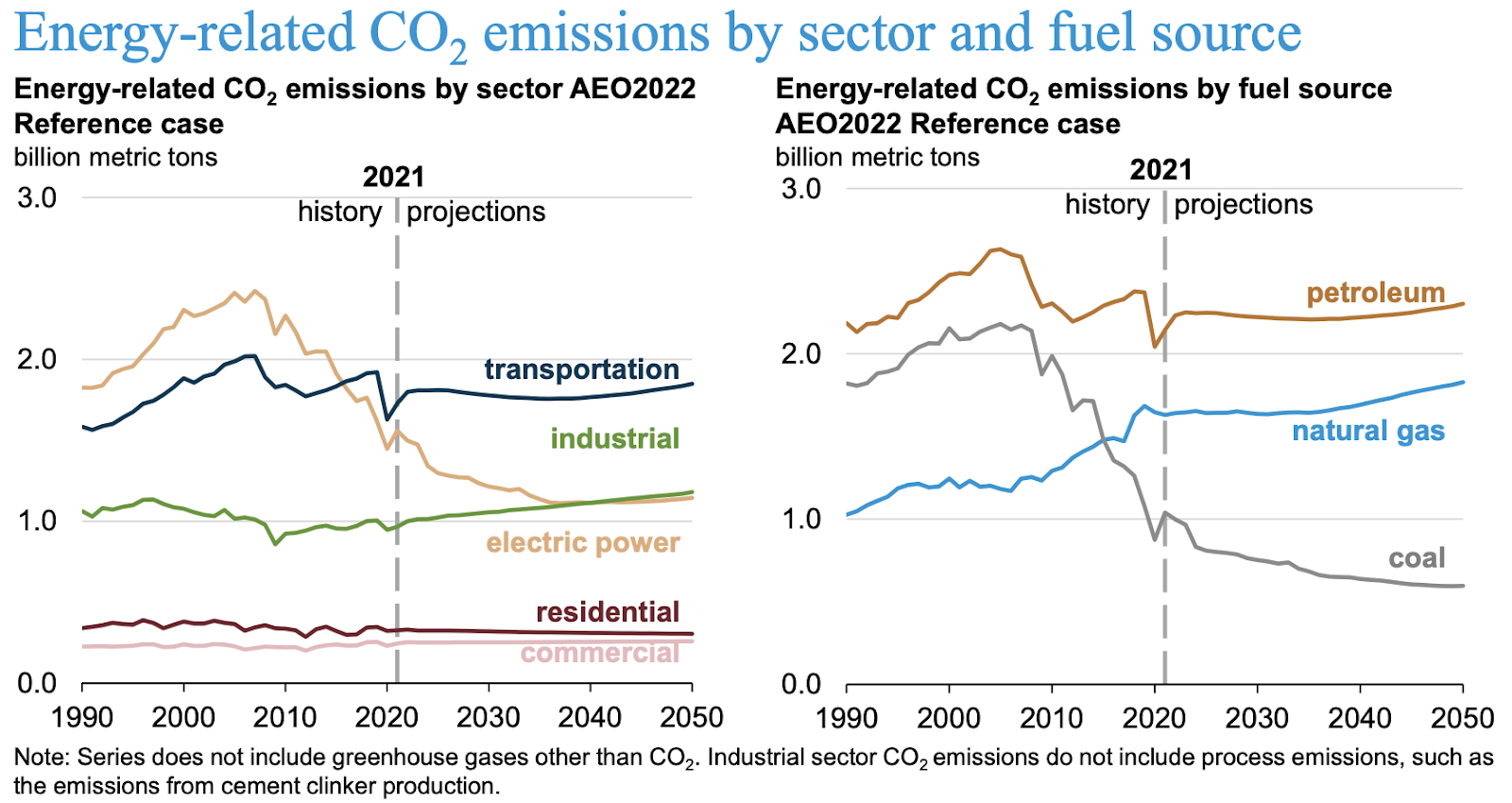 That’s unacceptable, because reaching 2050 with only minor use of renewable energy and nearly unchanged CO2 emissions is inconsistent with a climate we and future generations can tolerate. According to the International Panel on Climate Change, “[t]he scientific evidence is unequivocal: climate change is a threat to human wellbeing and the health of the planet. Any further delay in concerted global action will miss a brief and rapidly closing window to secure a liveable future.”

In addition to its Reference case the EIA also models a few alternatives –  including scenarios of low-cost renewables, high-cost oil, low oil and gas supply and low economic growth. Each of these scenarios results in lower carbon dioxide emissions, but not nearly low enough to address the climate crisis. 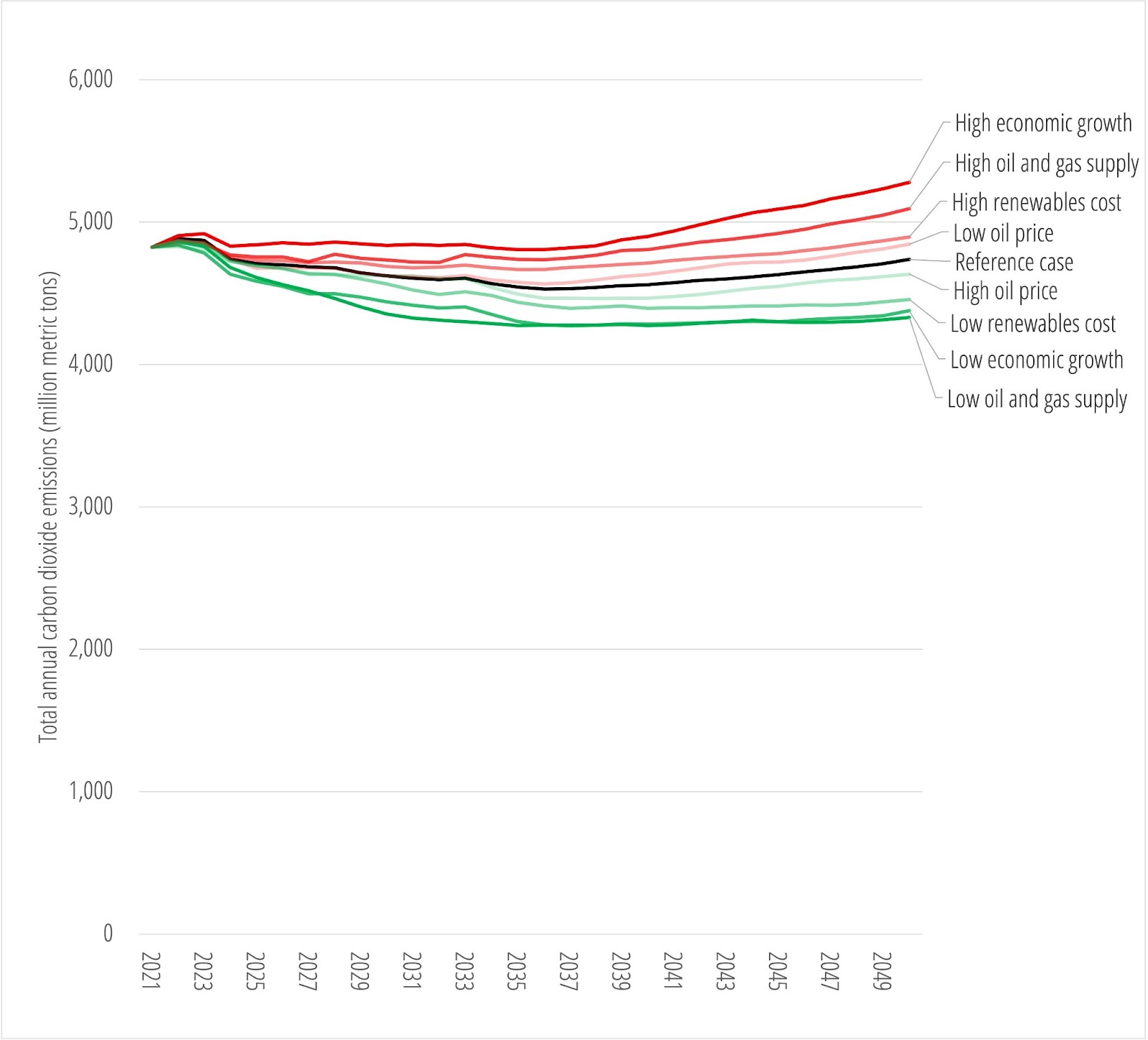 But what if, instead of treating these scenarios as separate visions of the future, we considered a world in which all the various lower-emission options took place at once? A future in which renewables are cheap and abundant, fossil fuel energy is made scarce and expensive, and growth in consumption of energy and materials is limited?

And what if we used public policy to achieve those aims all at once? We can use policy to subsidize and incentivize the growth of renewable energy, and to disincentivize and remove subsidies from, or even impose costs on, fossil fuels. We can use policy to shrink the fossil fuel industry by no longer permitting new extraction or production. And we can use policy (and culture) shifts to change our relationship with consumption in order to make, use and waste less stuff. By taking action on a range of fronts, we can accelerate existing trends (like the faster-than-expected cost decrease and growth of renewables) and drive significant social and environmental change.

The federal government is making some movement in that direction: the recently passed Infrastructure and Investment Jobs Act provides billions of dollars for important projects, and there is still talk that some of the crucial climate aspects of the Build Back Better agenda could be enacted.

But to protect Americans and people around the world, we will need to do more. We’ll have to radically change how we produce and consume energy, goods and foods; change the ways and the places we live; and transform our societies and the ways we relate to each other and the natural world.

Projections like the AEO map out the scale of the challenge and the consequences of inaction. But they also show that if we act quickly and boldly, we have the tools to build a safer, cleaner and happier world.