Americans have accumulated $1.44 trillion in auto debt, the highest level in history, according to new data released by the New York Federal Reserve Bank on Tuesday. An analysis of the data by Frontier Group and U.S. PIRG shows the amount Americans owe on their cars has doubled since the United States emerged from the Great Recession in 2009, continuing a trend that leaves millions of Americans financially vulnerable.

Both new and used car prices have skyrocketed in 2021 because of a shortage of semiconductor chips that has impacted nearly every automaker. New cars rely on this technology for everything from backup cameras to in-car entertainment systems. 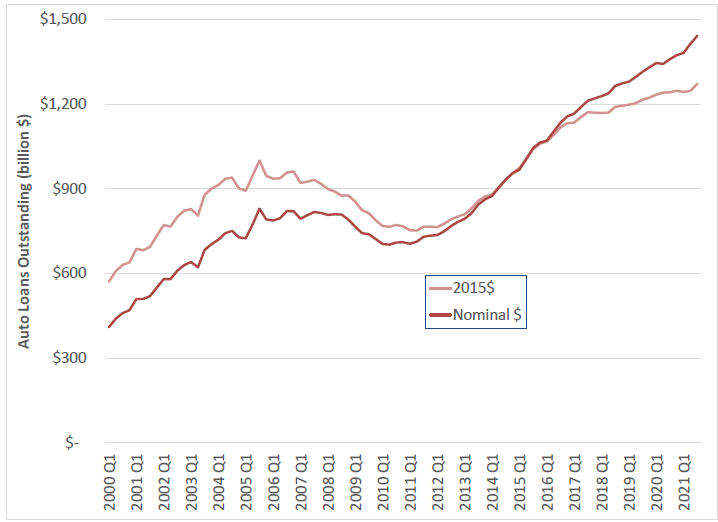 “New and used car costs have been rising for years, and the recent surge in prices due to the chip shortage has not helped,” said Ed Mierzwinski, senior director of U.S. PIRG’s Federal Consumer Program. “With the chip shortage projected to continue at least into next year, even more consumers will face the tough decision of whether to go deep into debt for a car.”

The average monthly payment for a new car now tops $575, according to data from Experian. Rising payments, especially when coupled with longer loan repayment periods, expose consumers to greater risk of default in the event of an economic downturn. As of the second quarter of 2021, the average length of a new car loan had reached 70 months, compared to the standard 48-month loan.

“Many Americans live in places where not having a car means not having access to school or to work or to key services,” said R.J. Cross, policy analyst at Frontier Group. “When taking on huge amounts of debt is the only way to afford reliable transportation, that’s the choice many of us feel compelled to make. Congress took a step toward giving more Americans the option to live without a car with last week’s bipartisan bill investing in transit, biking and walking. Americans deserve more choices when it comes to how they get around.”